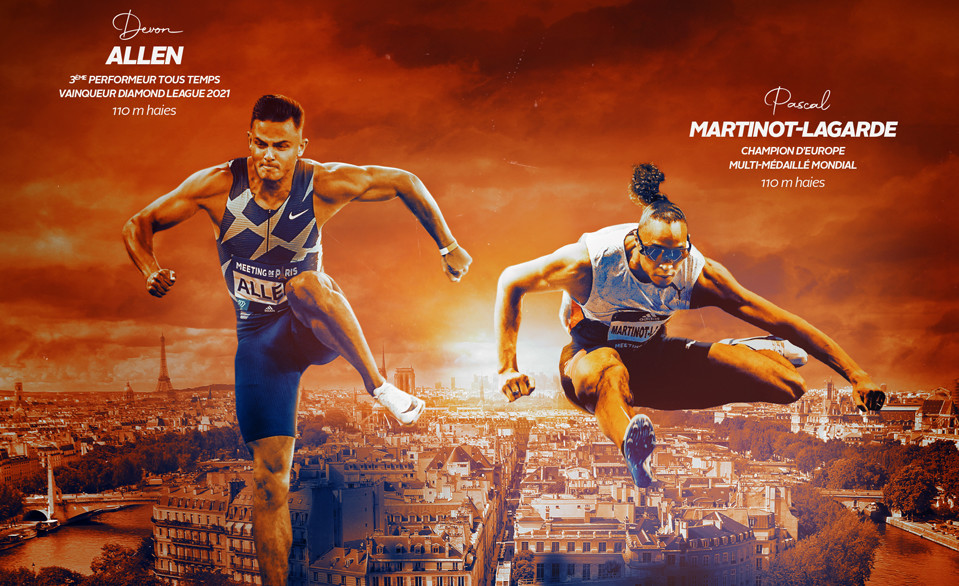 Posting a remarkable time of 12’’84 on Sunday in New York, American Devon Allen has an appointment with France’s elite 110 m hurdlers this Saturday 18 June at the Charléty Stadium, for what is expected to be an explosive, record-breaking cocktail.

Devon Allen’s commitment to the Wanda Diamond League Meeting de Paris is known for ages and on Sunday he was keen to stress that there was no way in the world athletics fans could miss the competition at the Charléty Stadium. Running a time of 12’’84, the lad from Arizona has become the world’s third fastest 110 m hurdler of all time, just four hundredths of a second shy of the world record secured by his compatriot Aries Merritt. And to think it was the first time that the athlete who bagged fourth place at the Tokyo Games (5th in Rio in 2016) had posted a sub-13’’ time, just when he’d spent the past few months retraining for a career in American football…
He won’t be the only one in Paris to have already run a sub-13’’ time, since Pascal Martinot-Lagarde has confirmed that he’ll be making his comeback in this event, after a calf injury which has given him a hellish start to the season. The world number two at the indoor championships in Belgrade has held the French record since 2014 and his time of 12’’95 at the Monaco meeting. Though he’s shifted his focus from the battle to shave a few hundredths of a second off his performance to a top-three spot on the international leader board (he already boasts twelve podium places in his massive track record), PML likes nothing better than major races and major challenges to raise his game even higher.

Zhoya keen to prove himself

Having already achieved the time requirement for the world championships in Eugene, albeit with no guarantee of actually making it there given the density of French contenders in the discipline for the past two decades, Wilhem Belocian and Just Kwaou-Mathey will have a golden opportunity to improve on their personal bests: 13’’15 for the farmer, 13’’30 for the latter.
An Olympic finalist in Tokyo, Aurel Manga has not yet found the trigger to bring down his time in 2022, but he is most definitely a man who steps up to plate at major events. Indeed, with one week to go till the French Elite Championships in Angers, it’s worth betting that he’ll be up for the fight at the Meeting de Paris. New rising talent Sasha Zhoya, who racked up a promising 13’’48 in Geneva last Saturday in what was only his second race over 106 cm hurdles, will also line up among the contenders. Up against such stiff opposition, the world U20 champion 2021 should be able to really bring his A game and will soon be setting the standards against the best athletes on the planet.
In addition to Allen and France’s four musketeers, Polish hurdler Damian Czykier, Briton Andrew Pozzi and the young Spaniard Asier Martinez will act as referees at the start of the qualifying heats, which are due to get underway from 20:11 hrs. The final bid for the title is scheduled to play out down the main straight at Charléty at 21:44 hrs.