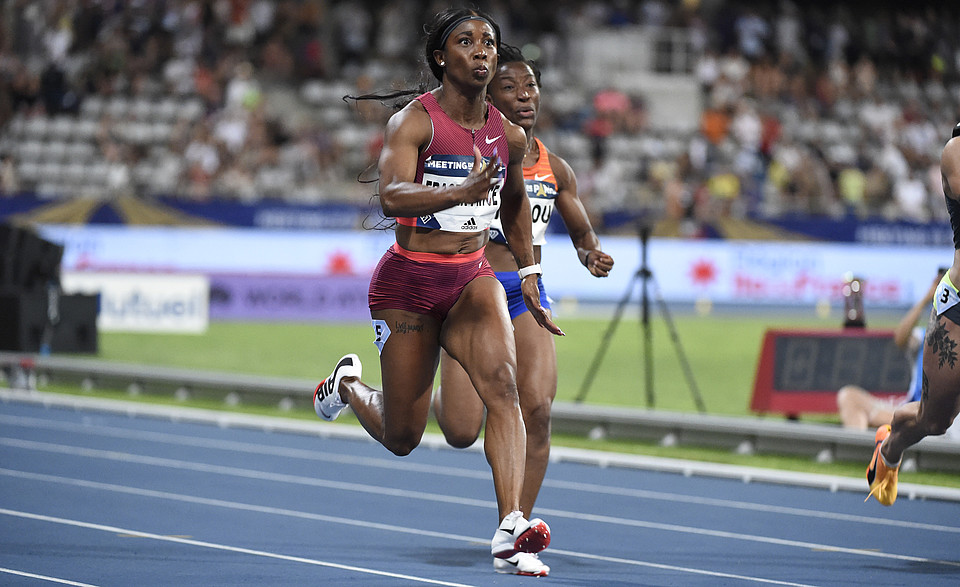 At 35 years of age, Shelly-Ann Fraser-Pryce remains one of the queens of the straight line. The Jamaican banged the point home in Paris by running a fabulous 100 m. Out in front from the moment she sped out of the starting blocks, she continued to stretch away from her pursuers to cross the finish line in 10’’67 (+0.5m/s), a meeting record. “I train hard and I’m now going to set my sights on the national championships, she admitted. The fans were fantastic and I relished the evening.” The triple Olympic champion joins her compatriot Elaine Thompson-Herah at the top of the world ranking. Briton Daryll Neita also ran a sub-11’’ time, in 10’’99, two hundredths of a second in front of Marie-Josée Ta Lou from the Ivory Coast.

Winfred Mutile Yavi’s progress was not hampered by the mugginess pervading the Charléty Stadium track this Saturday evening. The Bahraini did not flinch as she pursued the Kenyan Virginia Nyambura, who set off at a crazy pace (2’55’’65 at the 1,000 m mark). And nor did she crack, going it alone as she held onto the lead for the last two kilometres. The winner in 8’56’’55, she improved on the world leading performance of the year posted by Norah Jeruto (8’57’’97) by a little over a second.  “It’s incredible, I didn’t think I was capable of that, she exclaimed. I’m so happy, but now I need to get some rest before the Worlds.” Ethiopians Sembo Alemayehu (9’09’’19) and Mekides Abebe (9’11’’09), second and third, finished some way off the pacesetter.

The Ukrainian triple in the high jump received a rapturous welcome from the public in the Charléty Stadium: Yaroslava Mahuchikh posted the world leading performance of the year, raising the bar to 2.01 m on her second attempt, even coming achingly close to clearing 2.05 m on the back of that. Iryna Gerashchenko ranked second, clearing 1.98 m on her first attempt. Yuliya Levchenko completed the podium with 1.95 m. Meantime, the double Olympic heptathlon champion Nafissatou Thiam ranked seventh, jumping 1.92 m on her return to the sport.

It was an outsider who took the win in the half lap of the track, in the electric atmosphere of the Charléty Stadium. South African Luxolo Adams secured a personal best and became the fourth best performer of the year in 19’’82 (+ 0.6 m/s), getting the better of Alexander Ogando (20’’01) from the Dominican Republic and Frenchman Mouhamadou Fall (20’’26). Outright favourite, Canadian athlete Andre de Grasse, reigning Olympic champion, couldn’t better 20’’38 to rank fourth.

The excitement in the audience reached fever pitch with the amazingly close-run and thrilling competition offered up by the triple jumpers. The duel between the two Cuban-born Diaz, Jordan and Andy, finally saw the former take the edge, landing 17.66 m on his fourth attempt. “To be honest, I’m very pleased, particularly as it was my first Diamond League competition,” he enthused. A naturalised Spaniard for a matter of months, Jordan Diaz finished one centimetre ahead of Andy with 17.65 m (-0.8m/s), which is a new personal best. Third place went to Olympic champion Pedro Pichardo with 17.49 m (-1.1m/s), who came incredibly close to pulling off an absolute blinder on his final attempt, just a centimetre shy of the mark.

Supplies were offered to the athletes this Saturday evening in the 5,000 m. A device very rarely actioned over this distance, it was perfectly understandable here with a temperature in excess of 30°C at nearly 23:00 hours. Ethiopian Selemon Barega shouldered his responsibilities admirably in these tough conditions, on his own for the final two kilometres to take the win. “It was very hot and very difficult to run, but the crowd helped me stick to my pace right to the last,” he explained. Taking victory by a clear margin in 12’56’’19, he outpaced the Burundian Thierry Ndikumwenayo (13’05’’24) and Ethiopian Muktar Edris (13’06’’54). Of note too was the fourth place on home soil of Frenchman Jimmy Gressier (13’08’’75), who improved on his personal best.

In a very hotly contested race right to the final hurdle, Nigerian Tobi Amusan gained the upper hand over her rivals in 12’’41 (-0.4 m/s), a new African record. “I know that I didn’t get the best start, but I tried to stay with the others: I prepared well, I was in it to win it and that worked!” The hurdler who trains in the US finished ahead of Bahamian athlete Devyne Charlton (12’’63) and Briton Cindy Sember (12’’73).

Benjamin Robert had a crazy night. The athlete from Toulouse treated himself to his first Diamond League victory with the audience right behind him every step of the way. Running 1’43’’75, he posted a sub-1’44’’ performance for the first time in his career. As is often the case, it was in the final 50 metres that he managed to find an opening and thread his way between two fellow rivals. “With 200 m to the finish, I was done in. I said to myself that it was going to be hard to finish it, but then out of nowhere I had a second wind in the last 50 metres. It just goes to show that anything can happen and that you must never give up.” Peter Bol, second in 1’44’’00, improved on the Oceania record. Dutchman Tony Van Diepen completed the podium, in a race where the top five improved on their personal bests.

Women’s discus: the Allman - Perkovic duel lived up to expectations

Following on from Oslo, American Valarie Allman got her revenge over rival and friend Sandra Perkovic in the discus throwing, with a fourth attempt resulting in 68.68 m. “I’m very happy to have taken the win here in Paris, one of my favourite competitions, and I’m now going to turn my attention to preparing for the Trials and the Worlds,” she said after the competition. In the warm, humid air of the capital, the Croatian ranked second with a throw of 68.19 m, her season’s best, way in front of German Kristin Pudenz (64.39 m).

Devon Allen won his seventh race in eight this season. After winning his heat in 13''20 (-1.1m/s), the third best world performer of all time (12''84) accelerated in the final to win in 13''16 (-0.2m/s).This was his second Diamond League victory of the summer, two days after Oslo. The American was neck and neck for a long time with the Brazilian Rafael Pereira, who equaled his record in 13''25. The Frenchman Just Kwaou-Mathey, who broke his record in 13''27 in front of his family, finished in third place.

The favourite in the lap of the track, Olympic champion Steven Gardiner held rank. The Bahamian outpaced his competitors in 44’’21, showcasing his usual relaxed style to secure his season’s best. “It was superb. I won the race, so I feel good, he responded. Naturally my priority is to hang onto my world title, but I also want to surprise myself.” Andres Feliz Lidio from the Dominican Republic took second in 44’’92 but could only witness the action from afar. Third place went to South African Zakhiti Nene in 44’’99.

Bahamian star Shaunae Miller-Uibo stood out as the boss of the lap of the track with a time of 50’’10. After a quick glance over her shoulder, she even allowed herself to ease off the pace at the end of the home straight, the double Olympic champion beating the two Polish runners Natalia Kaczmarek (50’’24) and Anna Kielbasinska (50’’28) in hot pursuit.

To the rhythmic clapping of the Parisian crowd, who always keep an eye on the pole vault competition along the opposite length of the track, Belgian Ben Broeders took the win by clearing 5.80 m on his first attempt, contrary to the local of the leg Renaud Lavillenie, who needed two attempts to clear the bar, a process which resulted in him taking second place. The Olympic champion from 2012 declared himself happy with his competition, in “an encouraging leg” before Eugene. Youngster Thibaut Collet completes the podium, with a jump of 5.75 m.

Japanese javelin thrower Haruka Kitaguchi bagged first place in a close-fought competition. With a third throw of 63.13 m, she overwhelmed the Latvian athlete Lina Müze (62.56 m) and Lithuanian Liveta Jasiunaite (62.09 m). The two throwers from the Baltic States could not emulate such talent, failing to improve on their first score.

Men and women’s hammer: Poland out in force

The Polish dominated a stellar competition this Saturday in Charléty. With a top throw of 81.25 m and four male athletes throwing in excess of 80.00 m, the reigning Olympic champion, a “very mentally strong” Wojciech Nowicki, who’d clearly enjoyed a confidence boost prior to the World Championships, took victory ahead of compatriot Pawel Fajdek (80.11 m). Frenchman Quentin Bigot ranked third after landing a throw of 78.12 m, another epic new performance for the reigning world number two. Among the women’s contingent, the red and white flag dominated the throwers area in the person of Malwina Kopron. Throwing 71.33 m, the Olympic bronze medallist finished just ahead of Romanian Bianca Florentina Ghelber (71.15 m).